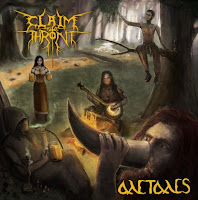 Claim the Throne is an Australian band who perform a familiar variety of modern folkish metal with some melodic death and black elements. Last year they released their debut album, which was based on an original story the band created. Aletales is the follow-up, and apparently not to be taken seriously, as many of the songs have jokish rhyming titles such as "Of Mead and Weed", "Set Sail on Ale", and "Fable from an Oaken Table".

Of course, this isn't really funny. Onto the music, shall we?

"Plundersaga" is a minute plus intro with some epic synthesizers and slowly charging guitars, with a combination of silly folk vocals before transforming into "Of Mead and Weed", another short song with a corny little melody that you may wish to pound your mug to. I really don't like the clean vocals, while I can appreciate a little folk in my metal these just sound silly. The song has all the requisite "Hey! Hey!" and a little horn part before the closing breakdown. "Set Sail on Ale" once again exhibits the "Hey!" factor, but this is a more 'intense' track with a polka reminiscent of Finntroll. "Fable from an Oaken Table" has some chorus parts that remind me of Mithotyn or very early Yearning. "Two Pints of Honey and a Barrel Full of Beer" is a pure folk shanty with an obvious chorus. The female vocals which appeared in "Set Sail on Ale" briefly are more prominent here, but they do little for me. I'd rather hear the manly crooning, as dorky as it is.

You've probably guessed by now that I did not like this EP, and that Claim the Throne have a release which falls on the sillier side of folk metal ala Alestorm or Korpiklaani. Gallivanting about the woods in your Medieval Faire garb does not always = captivating folk metal music. Singing about beer was cool (and funny) when Tankard did it 20+ years ago, these days if often feels like a cheap ploy to connect with an audience over an obvious commonality. This is meant to be fun and pass the time. I just didn't have any fun listening to it, and you're probably better off checking out their debut Only the Brave Return.

Positives: The EP does sound decent for an independent release, and some of the male vocals are actually pretty good. A few of the riffs would work rather well in a more serious setting. I get the feeling this band is capable of much more.