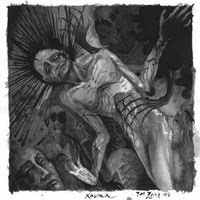 It never ceases to amaze me that my two favorite US black metal artists are essentially solo projects (with guest musicians). Scott Conner (aka Xasthur) has previously devastated me with albums such as Telepathic with the Deceased and Defective Epitaph, but I feel he has one upped himself with this latest opus, a brilliant foray into a realm of purely desolate guitar work and oppressive sewer-like atmosphere. All Reflections Drained needs to be heard to be believed, for few albums which make the effort turn out even a fraction as haunting as this.

"Dirge Forsaken" writhes with turbulent, subterranean desperation, as if your corpse were being carried through a sewage system towards the Underworld by black veiled, silent figures, a small fraction of your consciousness remaining to view the scene. A twisted pattern of guitar riffing repeats itself as other 'melodies' creep into the mix. "Maze of Oppression" features cascading walls of discord that create a hypnotic foundation for Conner's laid-back snarling. Disgusting and infectious. "Achieve Emptiness Part II" is like a nightmare reflection of post-rock or shoegazer rock within a doomy environs, highlighted by some sparse and well-placed samples. "Masquerade of Incisions" swells with chiming tones and horror film guitar jangle, and "Inner Sanctum Surveillance" creeps along like a bottom feeder through a rusted, submerged pipeline. The title track, which ends the album, is an epic exploration of haunting tones, samples and bleak ambience. About the only track I didn't care for on the album was "Damage Your Soul", but it's not out of place. The lyrics, where they exist, are sparse and crushing, never complex.

Halls and walls of consequence deem endless, where hope is the art of lying to yourself.
You're a lost fucking cause in a vicious circle of endless rape.
You've raped yourself in front of the mirrors I held before you –
running from a future and leaving a maze of scars.
As usual, the production of the record is desolate and oppressive, yet scintillating and 'glorious' when the songs demand. Vocals are held back into a pattern with the music, they never override the burden of the ghostlike mire of guitars that truly penetrates the soul. This is among the best material Xasthur has yet released, but I will warn listeners that it is not for the faint of heart. In fact, this is only 'black metal' in the loosest of senses. Conner is bent on exploring dark corners of the mind to which blackish metal is only the ticket booth. He has once again succeeded with flying...or shall I say the utter lack...of colors.