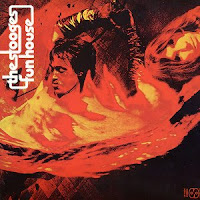 1969 had an entirely different cultural mindset. One of happiness and world unity. However, that didn't stop The Stooges from releasing one of the most bizarre, fucked up albums of all time. It has a free wheeling rock and roll vibe, as we chase then-little known Iggy Pop through New York's seedy underground of old, this quite literally in the track "Down on the Street." The Iguana's unmistakable vocals struggle for purchase amongst the sonic miasma:
Yeah deep in the night
I'm lost in love
A thousand lights
Look at you
That sense of a heroin filled stumble through that city pervades the entire album. The instrumentation is relatively simple for today, but imagining sitting around listening to it on vinyl back in its time blows my mind. It was recorded to achieve the live energy of the band, and holy crap, does it ever sound great.
It pains me to break down and review individual songs, as the whole thing needs to be experienced as a whole to capture the full effect of the music -- perhaps something lost on today's digital-driven youth. However, I'll indulge. Personal favorites include "Loose" with its fuck-off-we're-having-fun energy:
I took a record of pretty music
I went down and baby you can tell
I took a record of pretty music
Now I'm putting it to you straight from hell
"1970" aka "I Feel Alright" is an overdose personified through music. The song begins normally enough, devolving into discordant saxophone and repetitive riffs as Iggy screams about just how 'right' he feels. "Fun House." Not a subtle song title, but The Stooges didn't give a fuck and neither should you:
I came to play and I mean to play around
I came to play and I play real good
Alright, hey! Let me in!
***
I'm callin' from the Fun House! BLOW!
By the time the last track arrives I've fallen face-first into the dangerously polluted Hudson. It's nothing more than a fucking freak-out instrumental piece with piercing screams and an addict's cries for help, but I literally can't put it into words it's so good.
Overall, it may be the best album I have encountered in any genre. For its longevity, its influence on extreme music of all kinds with its carefree nihilism and drugged-out, discordant and heavy riffing. Please, if you've never heard this, you owe it to yourself.
Verdict: Epic Win [10.5/10] (out of my mind on Saturday night)
Posted by JD at 2:57 AM