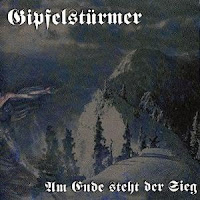 Gipfelstürmer is a pagan/black metal band from Germany with an influence of punishing thrash metal and some glorious warlike melodies that truly evoke the spirit of their ancestry. Information is rather difficult to come by on the band, and I haven't translated their lyrics, but the band does seem to be the 'proud' sort. If that offends you, stop reading this review!

If not, read on, because Am Ende steht der Sieg is packed with memorable, if simple, bombast and writing. "Die Schlacht Beginnt - Einklang" opens with some melancholic, mid-period Slayer-like melodies before the mighty chords and chugged verse of "Der Schmied" erupt beneath harsh, barked black vocals. "Ein Gruß Zur Ferne" starts with the sounds of rushing water before it becomes a gallop of pagan metal with some manly backup vocals. Again, nothing this band does is complex, but it's fun and loaded with meadhorn suckling power. Other great tracks include the majestic "Der Gipfelstürmer" and the raging "Stürmet Hervor", but I enjoyed most of what is here.

Perhaps the best element of this release would be the vocals. Whether they are snarling or clean, they sound fantastic in the native tongue. In fact, few German bands singing in German can compare to this. The guitar tone is sufficient for the band's lumbering, primal thrash riffs, and the drums are tight enough. Close your eyes while listening, and the band definitely evokes a primal pagan majesty to match the mountainous scene on the cover.

I rather enjoyed Am Ende steht der Sieg because it offered me pure pagan metal with little of the stupid folk drinking melodies that infest so many similar releases. This is pure and heavy, the ghosts of nostalgia conjured through its composition alone. The album is nothing ground breaking and few of the riffs have real lasting power, but as a whole it delivers.