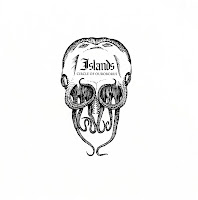 Circle of Ouroborus is perhaps the most bizarre act on the primal Finnish black metal scene. Since their formation 5 years past, they have already released a slew of demos, and Islands is their 5th full length since 2006. I have found much of their material boring, and Islands follows suit for much of its playlength, but there are particular moments here where the band is doing something quite cool, and as a result, it's probably their most accomplished album.

This is the third and final chapter of a trilogy that started with the albums Shores and Streams. The band's style here is sparse, minimal and psychedelically inclined. Intro "Vedestä" is simply a pair of guitars repeating some jubilant, spacey notes. "Somewhere Between the Planets" offers a wall of slow moving guitar drone with more of the spaced out dual guitars. The vocals of this band are fairly lazy and, like the drums, set far back in the mix. But it does create the effect of ennui. For myself, it felt like some band was jamming at a festival while in another tent some guy walked up to a microphone and just started pretending he was accompanying their music. While novel and rough around the edge, this does not necessarily make for a compelling album. It is best when the band actually incorporate some cool melodies, such as "Green Grey Winter" or "These Feathers in My Hand". The closing piece, another dual guitar instrumental called "Sumusta", was also mildly hypnotic.

The band attempts as raw a sound as they could possibly muster, this album barely functions above the demo/4-track level, fuck it could have been recorded on an old tape recorder except for all the voluminous swelling of the guitars. Oddly enough, I have no complaints about the actual production of the album, just that they could be on to something interesting, and that the band's minimal approach would not suffer from some better writing. Still, Islands may have a few moments that appeal to the fan of psychedelic/shoegaze-influenced experimental black metal, and it was probably the most memorable of their albums thus far.