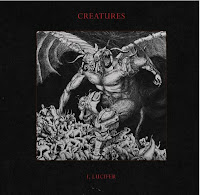 Creatures is a crossover band from California who mix aggressive hardcore with riff-heavy thrash metal. They're a little less retro and goofy than other crossover bands (Municipal Waste, etc) and this is a welcome element. Their hardcore half is much more rooted in a 'tough guy' influence like Biohazard or Hatebreed (in particular the grooves and vocals) than punky embellishments, and it works rather well. I, Lucifer is their full-length debut, having previously released an EP and appeared on some comps and a split with Downpresser.

The band's forte here is the mean thrash riffing, as populates a track like "Decimate" or the excellent "Burden". It meshes seemlessly with their breakdowns, and the band's use of a counterpoint gang shout really works to bridge the urban aggression of their style with the pissed off lyrics. The album is brief (about 22 minutes) which is acceptable for this style. No time is wasted. The band kicks your ass for 10 tracks that generally 2 minutes or less (with the exception of "Illusive Faults").

The mix on I, Lucifer is suitable with its boxy, punchy guitars and gruff vocals. Your mileage with this record will depend on how you feel about crossover metal/hardcore, and whether or not you enjoy big hooks, and violent pit grooves. Though I rarely visit this style of music anymore (my relationship with it started and ended with D.R.I., Cryptic Slaughter, Crumbsuckers, Leeway, etc), I am happy to hear that there are a few bands out there doing right with it. Creatures is one of those bands.

I was just thinking the other day that I could use some good new crossover material.