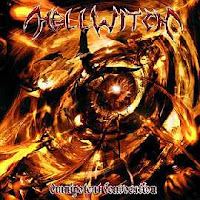 Hellwitch is something of a legend in the Florida death metal scene. The band formed 25 years ago, released a slew of demos, EPs, and a single full-length (Syzygial Miscreancy) before disbanding. They reformed a few years ago and now return to the spotlight with their sophomore album Omnipotent Convocation, a smattering of intensely fast thrashing death metal which operates in the rarely visited territory that channels the speed and malevolence of peers Morbid Angel, the prowess of Atheist and the vicious sneering abandon of Sadus.

This band is crazy. Fast. And mean. Lyrically they tackle grandiose subjects both ancient and futuristic, a macrocosm of dark philosophical spite that might appeal to fans of the Mythos (akin to Morbid Angel), but is not limited to just that. If there were any doubts as to whether the band could pull off their lightning pace and aggression, they are quickly quelled by the opening tumult of "Neolothic Journey". Yes, this band is back, and you can forget about the past, since this album dominates all their past work within a few tracks. "Mysteria" thrusts full force forward with insane winding guitar licks and Patrick Ranieri's caustic vocal style which is highly charismatic in a 'daemon from an alternate reality that wants to EAT you' fashion. Fans of bands like Atheist, Sadus and the obscure Terrahsphere will be prepared for this, the rest of you will not. The band continues to wallop you with death race after death race, standout speedsters include "Irreverent Salvation", "Vicious Avidity" and the head spinning "Opiatic Luminance" with a little dash of Voivod in there. The band rarely brakes for anything, but even when they do, they still offer some interesting and wild progressive/tech death riffing (i.e. "Mythologicalies").

Omnipotent Convocation has a crispy tone of it that demonstrates well the constant flurries of guitars. Ranieri's snarl rides the top like an infernal charioteer. The drums and bass are likewise at the top of the game, and fans of technical death bands (Morbid Angel, Hate Eternal, Nile, etc) will become quickly obsessed with miming the band's myriad of hooks. For all the strenghts of the album, I did not find most of the riffs to be memorable beyond a 'holy shit' reaction. But it's still a great listen, especially when you have the stamina and wherewithall to take it all in at once, and more than compensates for the band's previous absence from the mid 90s to 2004.