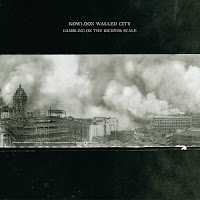 Kowloon Walled City is an aggressive sludge/core band from the San Francisco area, and they are offering this debut album for free through their website. This is a wise move which should maximize the band's exposure as they inject themselves into the rapidly overpopulating sludge scene here in the States.

Gambling on the Richter Scale is actually a pretty good time, with a slew of energetic, punishing groove rhythms that recall the best heavier moments of grunge and doom. The band's music is refreshing, it's not nearly as unapproachable as a band like Eyehategod but it's still disturbing enough to satisfy fans of the genre who are way off the deep end. "Annandale" anoints the album with a hypnotic pattern of churning chords under the tortured vocals of Scott Evans, who honestly sounded to me like a heavier, pissed off version of Mudhoney's Mark Arm. "Diabetic Feet" is another groover, with a very simple and satisfactory selection of chords that roil and fumble while you inject whatever poison you prefer into your stomach or veins. This band is like a hammer of sludge slowly being applied to the backside of your cranium. Other moments of flair for this record include the bluesy, wandering "Paper Houses", the crawling "Sleep Debt" or the slowly bouncing "Bone Loss" which will kill you.

The album has a dark sound to it which makes it all that much more perturbing amidst a sea of weaker, softer emo/sludge bands. I am oft reminded of the crushing ambivalence of the Melvins, or perhaps Iron Monkey, though the tone and vocals are different. Kowloon Walled City does not offer much forgiveness, this is best listened to if you are already depressed or seeking that level of negative emotion. But it's not entirely oppressive, and one of the better sludge releases I've heard lately.