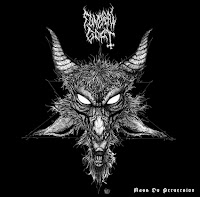 Mass ov Perversion is the debut from the side project of two Sauron members. Since Sauron is one of the best Dutch black metal bands in existence, I held my expectations for this material rather high. But Funeral Goat is more of a fun, silly side project. Two men drinking and writing songs about Satan and goats. What could go wrong?

Not a lot does go wrong here, but I didn't get a lot of value from Mass ov Perversion. The tracks all feature old school riffing with a lot of fuzzy overdrive on the guitars, reminiscent of Hellhammer and early Mayhem. HerrAIDs' vocals are dominant, and they alternate between gruff choking and more tormented black wails. It's a good thing the vocals create such a sloppy fun to the tracks, because the guitars don't do a lot, preferring to hash out simplistic riffs we've all heard before. A few of the tracks such as "Kiss the Goat" and "Calling Forth the Storm" get pretty intense and powerful, but stylistically they do not stand out from the rest of the album.

Mass ov Perversion is beefy, the fuzzed out guitars cruising over blast beats while the charnel vocals of HerrAIDs bark off into the Satanic night. I doubt these guys take this band so seriously, just a way to kill some time and have a little fun. Being that they are in Sauron, they have little to prove here. Funeral Goat is going to appeal to fans of really raw, old school black. It's messy and charming, grim and nocturnal, but offers little in the way of memorable music.