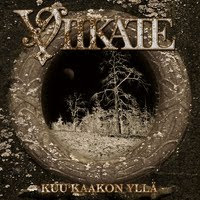 Viikate is not a band to have ever fit in comfortably within any particular metal mold. They have the gothic rock sentimentality of countrymen Sentenced, Charon etc. but they mix this with a sense for traditional heavy metal, folk melodies and lyrics of the native tongue. They've been at this for awhile, 13 years and this is their 8th album. The band has been getting better with age, the previous Marraskuun Lauluja albums (two separate releases) were brimming with quality, and Kuu Kaakon Ylla delivers another set of solid tracks with memorable hooks aplenty.

The acoustic/folk intro "Kouvostoliiton Laulu" clears the path for the melody-infused, Western vibe of "Elämä Kuin". Yes, Viikate are the 'spaghetti Western' of Finnish goth/folk metal bands, it's apparent from many of these songs. Perfectly ripe for a showdown at dawn in some Lappland clearing. "Kravattipakko" provides a Motorhead-like core riff as the gunfighters square off at high noon. "Eräs Kaunis Päivä" builds to a slow gallop across the peaks and valleys of rock. "Viina, Terva & Hauta" is a somber, gothic metal romp with scintillating chords that would make the late Sentenced proud. "Korpi" is a thundering, melodic epic that was my favorite of the tunes here.

Kuu Kaakon Ylla sounds like the past few albums. Money was well spent in making it sound extremely professional, and I don't have a single gripe about the mix. Most of the songs are good here, but few are catchy beyond a few listens. Kaarle Viikate's vocals are excellent as usual, but the Finnish language will provide a barrier to many listeners (though not the ones that matter). This is another fine album from a good band performing something different, they're not as metallic as Amorphis or Sentenced but if you fancy those acts you may wish to give this one a chance. They've been at it for some time and deserve more notice.