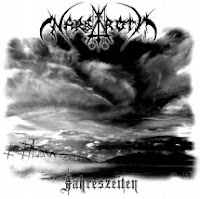 Nargaroth is perhaps best known for having titles like "Black Metal Ist Krieg" or "Fuck Off Nowadays Black Metal", but in truth the career of Kanwulf has been quite serious and the band has released some decent wok like Prosatanica Shooting Angels. Jahreszeiten is the 6th full length of Nargaroth and I had a mixed reaction. There is a very corny anthemic feel to many of the riffs on the album that caused me to lose interest, but some of the songs do build to a satisfactory finish.

Jahreszeiten consists of only 5 tracks but it's over an hour of playtime. "Prolog" is an ambient intro with some German spoken word, and "Frühling" is the first proper track with some flangy guitars that create a pompous, 'proud' sounding melodic riff that felt quite silly. Once the riff changes near the middle of the track, it does improve. "Sommer" opens with some classical electric guitar work that shifts to Kanwulf's bloodcurdling snarls over some other classically influenced patterns. It's folkish, martial and demented sounding. "Herbst" is a little more depressive, but features everything from acoustics to spacy synths, and despite its 22 minutes of length, one of the better tracks on the album. "Winter" is a scorcher with full drum battery and didn't lose me even after 16 minutes.

The album is hissing and raw sounding enough to occasionally hurt your brain, but this would not be a problem for many black metal listeners. The bass playing is caustic beneath the streams of melodic guitar, and Kanwulf sounds suitably rasp and hostile in his vocal delivery. I didn't care for the album up until the last 40 minutes (last two songs) which were a major improvement that brought me around to what I enjoyed about some of his past records. "Frühling" and "Sommer" felt a little cheesy to me, though I admit that this rather pompous style of traditional melody is not something you hear all the time.