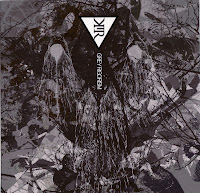 French cult Merrimack very much upped the ante with their previous album Of Entropy and Life Denial, one of the better pure black metal releases of that country. Though the band lacks the experimentation of a Blut Aus Nord or Deathspell Omega, they still impress for their raw tenacity and dark-laced, ominous composition. Grey Rigorism, their 3rd full-length, is not a huge departure in style, but a solid and intense offering which has grown on me with a few spins.

This is not a band who teases at you with bright melodies, but instead mire you within a twisted, downward spiraling labyrinth, with the only escape being madness, suicide or murder, or any combination of the three. The title is only fitting, for it represents the brightest color association possible when exploring the depressive waste this album projects. There is no 'gold' in "The Golden Door", just a morass in which the guitars are rusted beasts wandering through the ichor and decay. "Omniabsence" unleashes dank and cavernous riffing, with discordant grooves and a pulsing black edge. "Kirjath-ra" opens with the one of the better riffs on the album, then picks up into a faster pace recalling the previous album. "Cold Earth Mourning" stands out for its march-like opening percussion and thriving, desolate guitars. The title track creates some dark ritual ambience that leads into its roiling bulk. Other choice moments are the grim instrumental "Désaveu" with its monologue in French, and the steady, hellish clarion "In the Halls of White Death" which creates a killer deathlike groove near the 4 minute mark (also the most 'melodic' track of the album and another of its best).

Grey Rigorism sounds as black as you could hope, or as black as the lack of any hope. The guitars are clear, each diabolical chord resounding above the concrete drumwork and carnal rasp of Terrorizt. I didn't find it the equal Of Entropy and Life Denial, but the album shows a clear maturation from the band's early sounds, and it's well worth a listen for fans of French black metal and beyond (Satyricon, Mayhem, etc.)