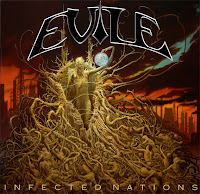 Of all the modern wave of bands to revisit the thrash sound of the 80s, Evile has been one of the more successful, causing a large buzz which even got one of their tracks added to the Rock Band video game. I derived little enjoyment from their debut album Into the Grave, thinking it average at best, but this second album a step up in the riffing category.

The title track begins with a nice acoustic intro before hammering into a slew of blazing rhythms. The style here is direct thrash/speed metal with enough American chug (ala Master of Puppets) and also the technicality of Germany masters like Destruction. Matt Drake's vocals are one of the things that put me off the first album. They're blunt and pissed off and remind me of Xentrix (and to a lesser extent Hetfield) and as with that earlier band, but really take a back seat to the riffs. "Now Demolition" features a nice, winding verse rhythm packed with precision and technicality, and some nice touches of melody that add depth, though the vocals are a little dull. "Nosophoros" is again a blast of tight riffing that should appeal to fans of Destruction or Artillery, and "Genocide" weaves a hypnotic pattern of chords into a slower pit fest. Other choice tracks include the manic "Devoid of Thoughts" and monstrous, labyrinthine "Metamorphosis".

Infected Nations has a punchy power to its riffing that combines with the more laidback vocals to create a nice layered depth to the tunes. I still don't love the actual vocals themselves, but this is one of the few albums to really remind me of Master of Puppets, despite its more technical guitars. I was pleasantly surprised by this album, easily superior to Into the Grave and worth hearing for the riffs alone.