The Ruins of Beverast - Foulest Semen of a Sheltered Elite (2009) 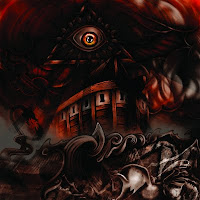 Although Alexander von Meilenwald's The Ruins of Beverast is one of Germany's best black metal bands, his work is quite different than his peers. But this has never been the case so much as it is with Foulest Semen of a Sheltered Elite, his third album with this project and the best yet. Semen is one of those albums which derives its influences from wherever it feels. Whatever works. In fact, it's often not black metal at all.

"I Raise This Stone as a Ghastly Memorial" christens the album with a plodding rhythm and sludge-like melodies, beneath the deep chants of Meilenwald. Yet the track shifts ever downward, to a breech in which the snarls and rasps return, before submitting to the brazen lower string melodies and plucky synth line. "Alu" is a brief interlude of chants and feedback to set up "God's Exsanguined Bestiaries", a blasting breath of rotting decrepitude offset by the barking growls and a driving melody within the soup. "Mount Sinai Moloch" thunders with majestic evil, a steady percussion overlapped in ringing sludge chords and light, airy synths. The entire album reeks of this ancient, mystical force that will enthrall you. "The Restless Mills" and "Arcane Pharmakon Messiah" are two of the other breaktaking pieces.

If thou... still creeping
Beheld us... still dreading
Thy sinister heights
Thou'd stand as a mere rock for us indeed,
A moloch for worms
A colossal artefact
Guardian and denouncer of the weak

Note that the album is slow and bombastic, as nearly akin to sludge/doom/funeral metal as black. It's a powerful statement, and for a one man project, quite impressive. The tones are bold and crashing yet never overproduce, lending a raw vibrancy to the atmosphere. It's another groundbreaking notch in the belt for Beverast, and a great listen for any fans of the 'avant garde' in occult, dark metal music.