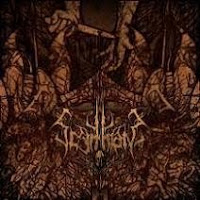 Another band which has come from nowhere to blow me out of my seat, Scythian is an English group that performs an explosive, energetic brand of death and thrash metal which is a great soundtrack to some serial killer's excesses. Beyond the fact that they induce frenzy with their sneering, fast forward delivery, the band goes one further to add layers of melody and atmosphere where many similar bands do not.

"Pray to War" strikes first with a volley of bursting guitars ala Slayer, Razor or Sodom. The momentum is crowned with S. Vrath's wild, throaty vocals that sound like sheer chaos. The bridge of the track features some choir/synths behind a melodic rhythm, a little unexpected but elevating the song into the stratosphere. "Astral Assassins" hammers out some dark grooves and blistering rhythms that recall Morbid Angel levels of insanity; and again this song is laden in the glorious evil of some well placed synths. "Shattered Idols" is a slower track with some huge majestic riffs, though not void of cruel thrashing. "Ares Guide my Blade" once again evokes a fast, cruel death metal, and "Spires to Ashes" has some excellent, soaring melodies. In all, this is a great debut album from a pretty killer new band...

The tones of the guitars are filthy and spewing forth a thrashing hostility. The drumming is tight and vicious, and the common use of synths really deviates this band from the normal old school thrash/death that a lot of Swedish bands purvey (bless their hearts). If I were to tell you that you could take Morbid Angel's "Chapel of Ghouls" and extend it into an entire album, would that excite you? Then buy this.

I detect concentrations of Mithras influence.

If, by Mithras, you mean Morbid Angel, then you are correct sir!