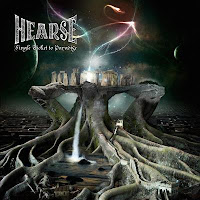 I've been waiting for a knockout blow from Johan Liiva's Hearse for years, and it seems to have arrived with their fifth full-length Single Ticket to Paradise, an album that combines it's influences of Entombed and Desultory with a newfound melodic flair and excellent songwriting. The ex-Arch Enemy/NonExist vocalist and crew have been building up to this through their recent output, but Paradise dominates from front end to back, each song sinking some sort of hook into you.

A brief instrumental leads into the swaggering blues metal rhythms of "Misanthropic Charade", brutal and charging, with flurries of melody ascending from its deeper death metal hooks. The chorus is amazing, driving rock and roll intercepted by cutting melodies, all the while Liiva's brutal throat does not let up. "Sundown" uses a familiar descending pattern of notes for its opening gallop before shifting into a grinding d-beat rhythm for the verse. "The Moth" is a slower paced, epic rocker laden with simple, classic leads, and a total stoner death rock out. "An Emotional Fraud" grooves hard while routed in that thick, traditional Swedish deathstyle of pioneers Entombed. "Single Ticket to Paradise" creates big, bluesy riffs beneath well-placed samples. "The Ferocious Embrace" and "Degeneration-X" both rock, though I may not agree with the lyrical intent of the latter. The album closes with "Your Purgatory", a gloomy 'romantic ballad' that makes for a nice break from the intensity to come before.

Single Ticket to Paradise sounds fantastic, in fact it might be the best sounding death & roll record of the 21st century thus far. Huge guitars, biting melodies, impacting energy, and one of the better vocalists in melodic death metal all contribute to a real winner for Hearse. Should be on the shopping list of anyone that longs for the days of Wolverine Blues, Swallow the Snake, Burning Bridges or Stigmata.