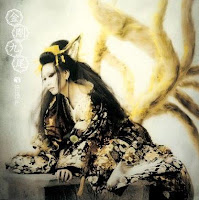 It's safe to say that Onmyo-Za is Japan's very best female fronted metal band. While a recent crop of such bands have sprung up, vainly attempting to mix the symphonic style of Nightwish with visual kei aesthetics, Onmyo-Za sticks to their guns, performing 80s style speed/heavy metal and consigning their own visual elements (the band's traditional garb) to the stage and video. Like many Japanese artists, the band is prolific, releasing a slew of singles, DVDs, and albums. Kongo Kyubi is their 9th full-length in just a decade, and not the best, but it will appeal to fans of their j-rock/pop meets classic metal style.

Flowing, melodic and inoffensive, just about any of the tracks on Kongo Kyubi could be featured as an anime OP/ED (like their Basilisk theme a few years back). This is accomplished through their catchy hooks and the dual female/male vocals of Kuroneko and Matatabi, which interweave fluently throughout the tracks. Some of the better tracks on this album include "Soukoku", the very 80s hard rock of "Izayoi no ame" and the most metal tracks on the record, "Aoki Dokugan" and "Kuraiau". The band breaks it up for some bluesy tracks ("Banka") and the three-track mini cycle "Kumikyoku (Kyuubi)", which is quite good.

Enjoyment of Kongo Kyubi, like many of the band's records, will depend on how well you favor classic radio metal of the 80s, j-pop vocals and melodies that shadow the romantic energy of the band. Onmyo-Za is a pretty unique entity, and not for everyone. If you're new to the band, I'd advise you start with previous efforts like Hyakki Ryouran or the great Garyotensei, but if you're already enamored of the band's style and poise, there should be enough here to tide you over until their next album (you probably won't be waiting long.)