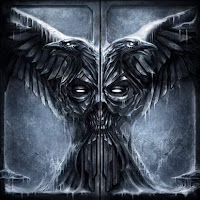 It's been a long, hot 6-7 years since Immortal 'broke up' after releasing Sons of Northern Darkness, and ever since, their starving legions of fans have awaited the return of their cold, hoarfrosted tones. To be fair, we did get a taste of wintry paradise with 2006's Between Two Worlds album from Abbath's supergroup I (which really grew on me after an initial, mixed reaction), and this new Immortal full-length really combines that style with a little Blizzard Beasts and Sons of Northern Darkness to produce another monolithic milestone in the band's career.

Despite the torrent of internet mockery over photographs that this band has taken (likely in self-depredation), they've always been one of the very finest of Norway's black metal dynasty. They have never really faltered, and they certainly don't on All Shall Fall. The album is monstrous, with some of the best guitar tones I've ever heard on a recording of this type. The simpler, warlike riffing of their previous album remains intact here, each track a shimmering, accessible glimpse of desolate northern beauty that stains the mind long after the last beat of its drum. "All Shall Fall" leads the cavalry, a jackhammering white wyrm of grand guitar with subtle melodic textures forcing the line. "The Rise of Darkness" trots out with a pulverizing rhythm before its scintillating I-like hooks conjure fire and rain, sadness and glory. "Hordes to War" is forceful and brutal, recalling some of the material from Blizzard Beasts and In the Heart of Winter. "Norden On Fire" features deeper, melodic riffage (again reminding me of I), and "Arctic Swarm" scorches with some winding, thrashing rhythms and incessant drum battery. "Mount North" captures a lot of the savagery of the last album, and the album closes with it's 'epic', "Unearthly Kingdom", which is the best fucking song on this record and also very like what we heard on Sons of Northern Darkness.

It would be an understatement to say All Shall Fall sounds good...it sounds staggering, the rival of anything the band has released before. The material culls the best aspects of past works, and if you're a loyal Immortal fan, what more could you ask for? I'd be hard pressed to number it among their best works, after all this is Immortal and they have been kicking ass for ages, but it certainly fits in with their better material and is a truly satisfactory comeback.

This is the album I am most excited about this year. With so many good surprises thus far, I can't wait to see how my expectations hold up.