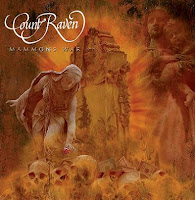 13 years have passed since Messiah of Confusion but little has changed in the Count Raven camp. They have returned, they still sound like the natural extension of Osbourne-era Black Sabbath, and they still rock. They've always been one of the better bands to carry that torch, and please do not be surprised when you pop this on and exclaim "Oh my God this man sounds just like Ozzy!". Because that is really the point of any Count Raven release, to further widen the pantheon of traditional doom's progenitors. Ozzy's last few albums have been pure manure anyway, so where will you turn?

"The Poltergeist" packs a pure rock'n'roll groove which should instantly please fans of the band's former work, as well as more recent bands like Orange Goblin, Terra Firma or Lord Vicar. Riffs are kept simple, big, Iommi-catchy, and there are some nice synths added for the bridge to elevate it. "Scream" breathes a little more slowly, a few chords giving Fodde's vocals room to really capture those early Sabbath heights. The 2nd riff kicks ass alongside the vocals and the bells. "Nashira" opens in the vein of stoner anthems like "Sweet Leaf", and "The Entity" creates a subtle grooving texture, carnal and laid back. Other highlights include the proggy synth-oriented "Mammons War" which sounds like nothing else on this album, or the sorrowful "To Kill a Child". All in all, you are getting over an hour of new music from the bastard stepchildren of traditional doom metal, and you won't disappointed if you enjoyed any of their previous output.

And Mammons War sounds much like those earlier albums, if a little more polished. Full, vibrant riffing with the synths and acoustics mixed in pleasantly where they appear. The drums fluently stride beneath the weight of the riffs, and Fodde's vocals cut through just like 70s Sabbath. If you're not already a fan of Count Raven, and you enjoy the first 4-5 Sabbath albums or their progeny like St. Vitus, this is a no brainer. It's honestly one of the finer albums this band has produced.