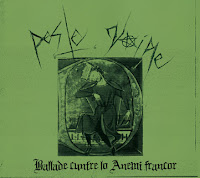 Peste Noire have always been a bizarre band (left and right of center), from their roots in nationalism through the more depressive black metal of Folkfuck Folie to...whatever the fuck this album is. And I say that with no disdain or disregard, because if you can tune yourself out to all expectations of genre, Ballade Cuntre lo Anemi Francor is one of the most interesting releases this year.

Imagine a band trying very hard to be bad but failing at every turn, each questionable exploration transforming into a new wonder that steps beyond the borders of feasability. A hybrid of progressive and folk rock, unpolished punk and black metal with female vocals, samples, and bloodcurdling snarls, Ballade Cuntre lo Anemi Francor does not fail to fascinate through its 40 minutes of existence. The vocals of Sainte Audrey wail over a sparse, broken percussion while Famine's old ladylike rasp inaugurates a flow of noisy, garbled melodic picking, "Neire Peste", which surrenders to the hypnotic, deceptively disjointed, rocking "La Mesniee Mordrissoire". The riff at the minute mark is truly one of the most beautiful and terrifying things I have ever heard. "Ballade Cuntre les Anemis de la France - De François Villon" is a depressing piece with some jangling folk guitars over subtle crashing percussion that conjure you into some alternate reality of France in the Dark Ages. "A la Mortaille!" is a solemn, grim, wandering work, and "Soleils Couchants - De Verlaine" is a mesmerizing wave of sadness executed through pretty bass lines and a spacious ambience created through its cavorting snarl/female vocals.

If this album has a weakness, it's that a few of the shorter, interlude pieces simply do not live up to the amazing, normal length tracks. They're not at all bad, just not interesting. But the meat of the album itself is stupendously excellent, exceeding any expectation I could ever have had for this band and throwing down the gauntlet for unique folk-inspired metal bands to come. Ballade Cuntre lo Anemi Francor is important, and it's unreal.

You're spot on here - the full songs are brilliant, but there's a bunch of filler-esque songs that are probably amusing for Frenchies but don't measure up otherwise.

One of my favorite bands. Sieg PN!