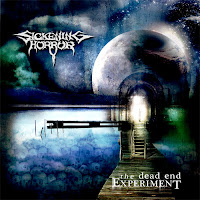 A couple years past, this Greek band released When Landscapes Bled Backwards, a reasonable debut of acrobatic, brutal death metal with a refreshing, crisp bite to it. There was room for improvement there, room which Sickening Horror have swollen into with their follow-up The Dead End Experiment, a fusion of pure old school death metal and the band's playful, progressive elements that is sure to blow the mind of many an avid death maven.

This album has chops. Brutality. And a bizarre sense of dynamics which manifests in the bass playing of Ilias Darras and the fusion-like sequences that erupt in numerous tracks. "Dusk" opens with a techno drum beat behind which excellent, frightening guitars cascade before the band blasts you directly out of reality. Then the verse...which is like fusion/funk...and back to the grind. I am reminded slightly of Spheres from Pestilence, or Obscura from Gorguts (though not nearly as wild and discordant as the latter). "The Universe Within" flattens you with sheer speed, excellent riffing, a Pestilence-like groove, and some great leads. "24 Januaries" features more of the band's bizarre, progressive structure interspersed with huge grooves. All the while, the band retains their ear for great old school death rhythms circa the dawn of the style. The album is interesting through its entirety, but I'll name "Murdered Silence", "Children of the Swamp" and "Dressed in Madness" as other favorites.

The Dead End Experiment often feels like a lower budget recording, but still quite nice. The guitars create a death metal circus while the bass sounds like a cadre of extraterrestrial stoners communicating through bong hits. The leads wail off through the cosmos and, really, you couldn't ask for much more. This is just a fucking great death metal album, and it's unique atmosphere makes it stand out that much more. The band has outdone themselves, and I can only imagine what they will think up next.