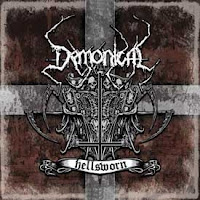 When this Swedish supergroup released Servants of the Unlight two years ago, I was completely floored, and it wound up as one of my favorite metal records that year. A ferocious onslaught of brutal Swedish death that pays tribute to its forebears but does not dwell on them as much as the 'retro sect' of bands overe there. Three of the members hail from the legendary Centinex, and Demonical sounds like a natural, improved progression for that band.

Hellsworn may not be the utter slab of darkness that was the band's debut album, but it definitely fucking tries. Opener "Baptized in Fire" lives up to his name, because the track feels like a conflagration consuming every shred of my flesh and bone. Well timed samples and a depressive background melody carve this into the perfect initial onslaught for a death metal record. "World Serpent" dials back the pace, a brutal rocking rhythm not unlike something you'd find on the first two Entombed records. "Infernal Void" is a tasty vignette of butchery that will appeal to fans of Vomitory, Centinex, and Fleshcrawl. "Bloodridden" creates a crushing wall of doom riffing, and at the perfect moment adds a slight twang of acoustic guitar in the background before breaking into its meaty bludgeoning verse rhythms. Sickening. Other excellent tracks include the pumping "Death Metal Darkness" and the bluesy, battering title track at the end of the record.

The production here is pristine, dark and potent like chunks of beef being fed to the shredder. The leads wail off with abandon, the vocals are caustic without a hint of concern or kindness, and the writing is yet again superb. I still favor the debut slightly over this album, but it's another mandatory purchase for any fan of true death metal.