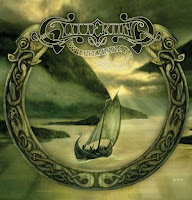 Landkjenning is the third full-length from Viking/folk act Glittertind, named for a famous Norwegian mountain. It's taken six years to release the follow-up to the excellent Evige Åsatro, but for the most part the wait has been worth it. Glittertind perform a lighter style of folk metal, with emphasis on the folk half: strings, flutes, organs and accordians are featured prominently on numerous tracks, and the entire album has a very 'swing your mug' vibe to it that should appeal to fans looking for the 'fun' aspect of the style.

The title track opens the affair with booming clean vocals alongside playful guitar work, but breaks into a beautiful folk segment after the 2 minute mark, almost a lullaby. "Nordjafells" features a slow charge of melodic guitars, strings and horns, and an amazing chorus with the hookiness of Týr's better material. This was my favorite track on the album. "Går min eigen veg" is a folk rock piece with traditional vocal melodies and shimmering guitars. Other highlights of the album include the tranquil "Mot myrke vetteren", the bold yet reserved "Brede seil over Nordsjø går" and the closing instrumental "Overmåte full av nåde". There are a few festive, punkier tracks which I didn't care for, such as "Jeg snører min sekk". Among the more serious material they seem slightly out of place, and I don't particularly desire punkish folk rock alongside my meadhorn.

Landkjenning sounds as clean and crisp as most of the modern wave of bigger budget folk metal albums. There is some good guitar writing here, especially the acoustics, but nothing excessive, with a tight focus on the actual writing and placement of vocals. There are a few tracks here which truly impressed me, but also a few I found awkward. The album isn't at the level of Evige Åsatro in its entirety, but it's worth hearing for the few songs that slay. Recommended to fans of Týr and the earlier Vintersorg records.