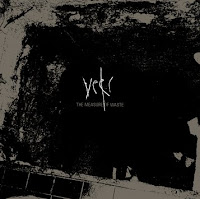 The Measure of Waste is the debut from grim Hungarian squad Veér, who also double in other obscure bands (guitarist 'M' is also the bassist for the fine Hungarian Witchcraft). Like a few other artists, Veér have thrown the occultist/pagan philosophies of black metal to the curb in favor of a commentary on the urban disgust which fills our lives, every day, often just out of sight. Thematically similar to the Czech band Stíny Plamenù, but this band is a bit more bleak and suicidal.

As for the band's writing style, The Measure of Waste is a collecting of driving rhythms set in the wet concrete foundation of legends like Hellhammer/Celtic Frost. All of the tracks feature some straightforward, rocking barrage of chords, from the raging "Pull the Trigger" to the desolate "...All These Things Will End". The bass plods along like a crocodile in your local sewer, just waiting for that poor city union worker to climb down a manhole for 'dinner'. Vocalist 'Jim Jones' uses a tormented inflection, you can hear the throat tearing as he swaps between a gruff brutal style and blacker sneer. Tracks like "Praise Be to Roach" and the creepy "This Spring is the Last" are quite excellent, and taken as a whole the album provides a consistent experience for those looking for traditional black metal rooted in the metropolitan undershadow.

The mix for the album is very honest and stripped down, but still manages to capture the dense and powerful riffs that create the ooze and murk of this urban void. The Measure of Waste is a high one indeed, as our civilizations crumble from stone to sludge and we feast upon recycled excrement. Lovely! I'm always glad to hear a band like Veér, and this is an easily recommended debut album for fans of urban black metal filth.