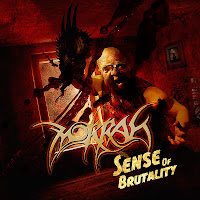 Sense of Brutality is the second album from Russia's Morrah, a death metal band with a subtly different approach: slow grooves, interesting riffs and unafraid to inject a little death & roll. This is not an album likely to blow your mind, but it's fun and listenable. This is also no Entombed clone, for the majority of the album Morrah is tearing their way through some pure death, and even when they bust out a little blues, it doesn't carry that Swedish tone.

The title track barges directly in with some choppy, chugging riffs, familiar death squeals and hammers. Nothing here is very memorable, but the boxy tone of the guitars and the energy level will get you prepped for the death/thrashy "Cemetery Feast" with its coffin-hacking axes, and the chug/slam of "Born by Accident". "Embodiment of Mind" is another brutal bottom feeder, but "Black Light" is probably my favorite track on the album, a slow thrasher with some filthy death & blues breaks. "Torn the Page" and "Collector" are also neck breakers.

The very boxy sound to the guitars gives the riffs some meat, and the drumming here is always intense and engaging. Alexander Dovzhikov's vocals are a steady (if occasionally monotone) grunt that goes well with the music. Sense of Brutality lacks the memorable hooks of a top tier death metal record, but it's energetic and the infusion of occasional rock elements gives it some character. As I haven't heard a lot of death metal out of Russia lately, it was a refreshing surprise.