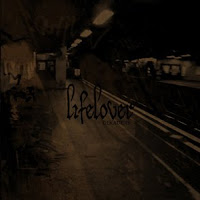 Last year's full-length Konkurs was a pants-dropping affair which transformed my mild but bland curiosity towards this band into a tumescent state of attention. It was all at once graceful, sad, plucky, epic and ridiculous, ample evidence of a band on the fringe of the oft-suffocating genrification that is black metal, doom metal, banana metal, 'depressive' rock, and the like.

Not knowing what to expect, as you can really never know what to expect from this band, I awaited the follow-up EP Dekadens with 7 tracks and nearly 30 minutes of material. My reaction is about as mixed as the chaotic spectrum of emotions present here. Some of the songs are right on the Konkurs level, like the melancholic black rock of "Lethargy" and the go-go gothic "Androider" with its tortured vocal garbles. "Destination: Ingestans" is another bright moment with its spacious, droning guitars that recall the best 90s shoegazer rock, though it breaks for both sultry acoustics and a fucking THRASH riff of all things. Other tracks like "Luguber Framtid", "Myspys" and the more directly black metal "Major Fuck Off" were pleasing enough for the first listen, but I did not feel any pang of loss at their passing.

The Dekadens EP should provide enough cream to fill the cakes of any Lifelover fan as they await the next full-length. It sounds quite lovely, and I'd count a few of the tracks among the band's better material, but I wasn't left the same post-coital soggy mass on the floor for it as I was Konkurs. Still, "Lethargy" is like suckling a teat of sweet milky regret, and the EP is almost worth it for that track alone. It should be dropping very soon, unlike your credit card balance.

I think it's great that they put this out to fill the gap til next year, but yeah, it's definitely not their best material. I still love it to pieces, though.