Urheimat - The Gates to an Elder Constellation (2009) 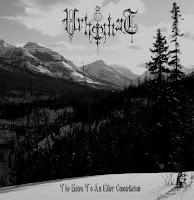 Canada's black metal scene expands by one with the explosive debut of Calgary's Urheimat, a band that takes drum machine fueled black metal to its limit with an album of hyperblasting rhythms, epic synthesizers, and a mixture of black sneers and soaring clean vocals. While many bands of this type revel in the simplicty and ambient tones of introspective minimalism, Urheimat instead fuses the more technical influence of Norwegian black metal artists like Emperor and Dimmu Borgir while bleating winds of majestic synth lines over the top. The proficiency of the musicians is undeniable, in particular the guitar work, arpeggios and other leads constantly blazing trails through the technical wildfire of the rhythm guitars.

The album is split between warp drive black metal blitzing, ala "The Grotto of the Endless Moon", "Tonttu-Ukko", "The Spires of a Thousand Kings", and "Unborn Star", and the ambient/video game-like pieces like "Entrenching the Path to the Origin" and "Through The Elders' Bow, Unto Which The Voices Of The Void Are Channeled". Some great titles, but quite a mouthful! Of these, I'd say the heavier material is more impressive. The synth pieces build up decent background music, but few of the melodies stood out to my ears. They are better used as backdrops for the band's scathing punishment.

For an independent release, The Gates to an Elder Constellation sounds magnificent. All the instruments are crystal clear, and the vocal create angst without drowning out the band's high precision rhythms and leadwork. The musicianship here is the rival of many far more experienced bands, and will certainly earn the band some attention. The logo and songtitles are quite good and the band is obviously well-versed, intelligent and tasteful. As for myself, I was impressed, but found the album to lack much in the way of memorable moments. The synth pieces are solid but average. The black metal is punishing and the virtuosity is rare among this type of band, but the riffs ring more of spastic nihilism than the focused evil I admonish. Either way, this is sure to turn the heads of many who fancy a high standard of technical flourish in their extreme music, including death metal diehards.