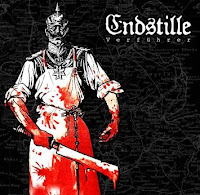 Germany has now proven itself one of the most robust and populated black metal scenes in the world, and few bands have been working harder at it than Endstille. Formed only at the turn of the century, they have already released six albums of a quality ranging from just good to great. Stylewise, this band emulates the harsh Swedish style of a band like Marduk or Dark Funeral, except that they have the ability to inject a subtle sense of graceful post-black riffing that creates a warmth and vibrancy to almost all of their tracks, which so many other bands in this genre lack.

Make no mistake, Endstille is not some post-black metal band, they excel at all the elements you expect: gut wrenching speed picked rhythms, a storm of drumming that simply cannot be human, and snarls of abandon and torment. Previous album Endstilles Reich was superb, but this is a match for it at every turn. "Alteration of Roots" is a whirlwind of driving rhythms, thundering blasts and creates a razor edged, melodic sheen, but "Of Disorder" is so wonderfully dark, graceful and punishing that I had to replay it a half a dozen times the first time I heard it. While repetitious, you just don't get sick of it. There are also a slew of other fantastic tracks, such as the disturbing "Monotonus" and the rusted razorblade grace of "Symptoms". A few of the tracks don't quite live up to the rest of the album. I found "Suffer in Silence" mildly boring, lacking that 'hook' this band always spews forth in its better songs. "Dead" is energetic, but had no hook in my flesh.

Despite these few flaws, Verführer is still a solid as hell album with a killer mix that captures its wrist cutting dementia. The cover art featuring Emperor Wilhelm II is a nice touch, and the band is in fine form as they continue to add corpses to their pile. German black metal really is the 'now', with a long line of bands offering quality material for your consumption and suicide. Endstille is one of the artists at the forefront, and their hard work has garnered them some attention beyond the borders. It is well deserved. Check out this album.