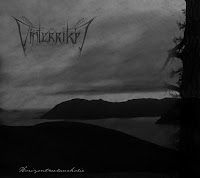 I am a major fan of the bleak ambient soundscapes created by black metal artists and those surrounding the scene, but in the wake of Mortiis going all darkwave (and Fenriz not releasing any new material from his Neptune Towers project), I have had to turn outside the scene for my fix (though the Cold Meat Industries, etc artists do it as well or better than anyone). The exception is of course the prolific German Vinterriket, who has been responsible for scores of releases since the turn of the century. Demos, splits, EPs, and a good many albums, most of which range from dark, minimal environment to cutting, ultra raw black metal influence. Horizontmelancholie is his 8th full-length release, and good, as it provides an interesting crossroads of his work to date.

Horizontmelancholie retains Vinterriket's heavy use of synthesizers, but there are more lyrics than usual, and more drums and guitars. He's always been largest within the black/folk fanbase, but this album has an appeal which can grasp far beyond the small subsect of listeners into the wider folk fandom. The lyrics are manly and German, but they can create a hypnotic lilt to the tracks as on "Herbstreich" and "Wogen des Firmamentes". My personal favorites here were the almost 80s synth-pop/ambience of "Irrlichterscheinung" and "Waldkult", two of the darker pieces .

Another artist whose production sensibilities have improved with age, this is the hugest sounding record of Vinterriket's career. Gone is the raw gloss of his early years, and to some, this may detract from their enjoyment of the record. To a degree, I prefer his earlier material for its darker tone, but Horizontmelancholie is an interesting album that held my attention for a few listens. I would not listen to this over a Lichtschleier or his previous Zeit-Los:Laut-Los, but it was still a worthwhile trip to take.