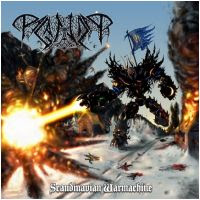 Rogga must seriously just LIVE early 90s Swedish death metal. He must eat it for breakfast. Take it for a walk in the park. Shower in it. And watch it 24-7 on television. Because this man is an unswerving force, a human detour sign which is turning back the clock and rekindling the old sounds of Dismember, Grave, Entombed, etc.

Okay, so he's not entirely alone in this endeavor. Paganizer, one of his myriad of bands, has now released their 7th album Scandinavian Warmachine and you know EXACTLY what to expect: the same sounds you heard on the previous six. Meaty guitars grinding out old school Swedish death rhythms, some of which succeed, some of which are boring and retread. There are 16 tracks on this album, and perhaps that is a few too many, because I could scrap half of these and the album would be better. The first two tracks "Forever Scorned" and "Scandinavian Warmachine" blew by without much fanfare, it was "The Flesh" which finally sunk a hook into my neck. Other inners include "Thule in Flames", the vile "Bonesaw Bonanza" and the riotous "The Skies Bleed Napalm".

Taken as a whole, this is another good offering for Paganizer, but you'll probably find yourself yawning or skipping through a few of the tracks. Though this is one of Rogga's most intensive projects with a large backlog, his other recent works by Putrevore, Ribspreader and Revolting feel fresher and catchier than this latest album. Still, any diehard of older Swedish death metal is going to find themselves cheering and hooked by at least half the material on this album.