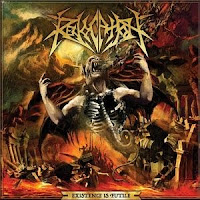 Normally I don't review bands that I'm personally acquainted with, but Revocation is one of our very best local acts and they certainly deserve a little representation here at the blog. Existence is Futile is their 2nd full-length as Revocation (they previously released an album as Cryptic Warning) and the first where I feel the band's explosive live energy and whirlwind technical playing are truly captured in the studio. If you've had a chance to see this three piece live, you'll know what I mean.

Existence is Futile is their Relapse debut and crushes its predecessor Empire of the Obscene (which I found a little bland). The album sounds intense, the guitars have the perfect punch to them and yet the fluidity of all the band's dense riffing is obvious. Stylistically the band ranged from complex thrash and groove, to a more straight laced tech death metal. "Enter the Hall" is a good thrashing instrumental to open the album, shredding included. "Pestilence Reigns" is frantic and punishing but laden in accessible grooves and driving rhythms. "Dethonomics" is a titan of winding riffs, and the title track plasters you with a barrage of deep thrashing and some slower, pensive pummeling. Yet, none of these are among my favorites, because the second half of the album truly picks up steam. "The Brain Scramblers", "Dismantle the Dictator" and "Leviathan Awaits" are all amazing tracks which number among the best death metal released this year, and "The Tragedy of Modern Ages" is a great seven minutes to close out the album.

Not a lot of complaints with this album! I did feel the latter half was stronger in scope, but the earlier tracks still feature some great riffs. I'm not the biggest fan of Dave Davidson's vocals, but they sound loud and aggressive on this album and add a grotesque layer of percussion to the already bludgeoning instruments. All three of these gentlemen have an excellent grasp of composition; despite their technical merits they never shred excessively or add too many riffs into the mix. There are slight progressive touches to tracks like "The Tragedy of Modern Ages" that always score upon delivery.

Massachusetts has had some huge success in the past decade with metalcore bands like All That Remains, Killswitch Engage, Shadows Fall, etc, so I'm crossing my fingers that Existence is Futile grants this band the attention that has eluded it for years, since Revocation actually deserves it. Their sound will appeal to both riff hounding thrashers and death metal fans.

Verdict: Win [8.5/10] (my fearful thoughts drowned out by the deafening artillery)