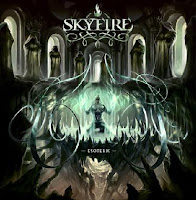 There are several Swedish melodic death bands that make excellent use of pianos & keyboards in their material, for example Dark Tranquillity and the early 21st century Soilwork. I've never found Skyfire's music to reach this caliber of quality, but the band have nonetheless produced some decent albums (Timeless Departure and Spectral). Esoteric is their 4th stab at a full-length, and it ranges from soaring to stagnant.

The symphonic "Deathlike Overture" intro is quite good, really building its momentum as you await the inevitable explosion. Instead, you get another piano intro that opens "Esoteric", a track that features Skyfire's range of grooving low-end, progressive riffs, harsh melodeath vocals and synth atmosphere. The chorus riff and choral vocals are quite good in the song, but the rest left no lasting impression. "Rise and Decay" opens with swirling pianos and semi-glorious melodies, reminding me of Dark Tranquillity if less catchy. "Let the Old World Burn" is fast but mediocre, but I did enjoy the slow, driving "Darkness Descending" and the catchy pianos that lead into "Misery's Supremacy". "Linger in Doubt" is a good song, and "The Legacy of the Defeated" is pretty pulse pounding, in fact they should have placed this at the beginning after "Deathlike Overture" for better album pacing.

Esoteric does sound glorious, and the ambient feel to its many pianos does grind together well with the thrashing low end guitars and vocals of Joakim Karlsson. There is a lot of musical proficiency in this band. The use of the female choral parts always feels fresh here, and with a little work they would make a formidable symphonic death metal band. Esoteric has just enough moments to pop with me, it's a fine production but still lacks the depth of songwriting to create a great album. In particular I would like to hear some catchier guitar riffs; these are all passable, but few would succeed without the swells of symphonic atmosphere surrounding them. Still, this is one of their strongest works to date.