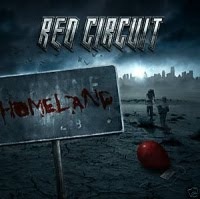 Chitral Somapala is one of my favorite vocalists in the progressive/power metal genre, so it's always a pleasure to hear him working with another new project. His work in Avalon and Ivanhoe was great, and if you enjoyed either of those, then Homeland is certainly an album you should check out. Rounding out the lineup here is a tight band that performs a heavier form of progressive/power metal with synthesizers and backing vocals from the producer Andy Kuntz. If you like the heavier side of Avalon or Vanden Plas, then this is a no-brainer.

Homeland is polished throughout, but there are a few tracks that really stood out to me on the album. "The World Forgotten Sons" escalates into a powerful, melodic chorus among its grooving guitars. "Absinth" ranges from balladic, melancholic guitars and vocals into emotionally charged power rhythms. "See the Light" has some great flurries of synth lines alongside the chopping guitars and Somapala's expressive vocals, which carry both melody and a mildly tortured edge. Other winners include the groove packed "Through the Eyes of a Child" and the agressive/angelic "Fall in the Skies".

Homeland has a thick tone to its guitars that makes it one of the heavier pure progressive/power albums of the year, and to its credit it can shift between these moments and those of tranquil respite with only a second's notice and you do not feel at all removed from the band's cohesion. The solos are well placed, melodic and memorable, and the vocal performance is, as expected, top notch. I don't hear many albums of this style each year that I enjoy, so if you're a fan of bands like Vanden Plas, earlier Eldritch (or a lot of other Limb Music acts) then you'll want to listen in.