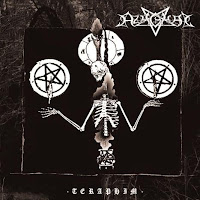 Azaghal is another of Finland's most enduring black metal acts, and Teraphim is their 8th full-length. Though they've had their share of decent records (Codex Antitheus for example), I am actually most impressed by this new material, which may have dialed down the aggression slightly, but presents itself with a refined sense for songcraft, structure and melody.

The album begins with a blast as "Elilum - Suuri Tyhjyys" takes much inertia, yet the song is so carefully twisted in soaring melodies that it takes on an almost transcendental vibe. The main riff in "XI Omega" sounds like "Painkiller" if it were condensed into pummeling, savage black metal. "Filosofi" is a slower, creeping piece with a diabolic groove and wicked bridge. The dual vocals in the chorus make for a nice effect. "Teraphim - Puhdistava Tuli" surges with burst of speed metal riffing intertwined with some glorious backing vocals. "Hänen Musta Liekkinsä" weaves chants and choirs into an ever descending black hook. Other standout tracks include the sweeping "Uhrattu" and the short but thrashing "Kyy" with its bluesy leads.

Tonally, Teraphim is a tapestry of darkness through which moon rays of melody occasionally shine. The album features plenty of core black metal moments, but rather than just the latest blastfest it's got many different tempos and rhythms to maintain your level of interest. Few of the songs are super catchy, but they flow together well as a whole and this is the most memorable Azaghal album to date. That said, if you're only interested in the grimmest, raw Finnish black metal, you may wish to start with their earlier records.