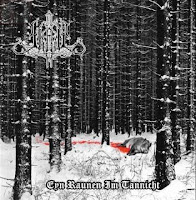 Skady is a young German trio formed only a few years past, and they have now delivered their debut, Eyn Raunen Im Tannicht, 8 tracks of melodic, catchy black metal with a pagan/folk influence. What strikes me the most about this band is their ability to write good riffs in a genre which has seen too much formulaic, phoned in pagan black/acoustic folk/pagan black/acoustic folk drivel.

"Einklang" is a wintry intro that basically goes along with the album's cover, a slain pig in the wilderness. This is not a joke. "Aus Waldern" charges forth with a glorious sheen to its riffing under the snarls of Andras. Tight drumming, powerful dense rhythms and a pervasive, ominous tone help round out the track. "Treibjagd" opens with a fist shaking riff over an interesting drum charge. With "Der Mühe Lohn", the folk instrumentation enters, a flute melody interchanged with manly, almost funny vocals that grate on your spine. "Oskorei" opens with a volley of bass like "Ace of Spades", but it's another majestic pagan black metal piece with a faster pace. Another good song is "Furor Teutonicus" which opens with the sounds of battle.

Skady creates a solid mix for the album, the bass is pumping like a vein and the guitars shine like both razors and the moon. There are probably too many of these pagan black metal bands out there already, but could one more really hurt? Eyn Raunen Im Tannicht puts forth a reasonable effort and evokes some memorable riffing, but there is still room to grow here so we'll have to see what the future brings.