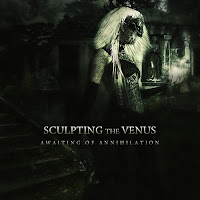 Here we have the debut EP of a fresh Ukrainian band performing a hybrid of black and death metal, with turbulent battering drums, and atmosphere provided through synthesizers and samples. There is a mild edge of experimentation to the material, and it is original, but if I had to pick, it most conforms to brutal death metal.

Pianos introduce "I See the Pentagram In Her Eyes", but quickly we are exposed to the insane, machinelike drumming of 'Saturn' and a slew of quickly chugged riffs. At the 1:40 mark of "My Memory in Ashes", the band gets ponderous, shifting the drum beat and creating laid back but fast speed picked riffs that create a nice atmosphere below the keyboards. "Destroyer, Serpent, and Eclipse" again opens like a goth metal song but then transforms into a savage beating with chugging, mechanical breaks over sparse percussion. This song really has the band delving into math metal territory. The 4th and final track "...and Only Ruins Will..." is a vortex of potential, easily my favorite of the batch. Catchy death metal rhythms played over steady driving beats and swallowed in atmosphere.

The production is better than demo level, I didn't find a lot of bass in there but the band's focus is on the big synths, grunt vocals and viral percussive speed picking. I didn't love the material in its entirety, and it's an EP, about 20 minutes long, but this band has an immense potential that I will not deny. The virility of Morbid Angel, a sheen of atmospheric black metal, and a willingness to experience with tempos are all signs that this band will appear on the radar of many, and soon. I'll be listening for whatever they do next.