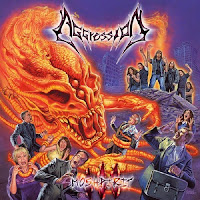 Not to be confused with the cult Canadian thrash/speed metal band, this Aggression is a Spanish band playing some exciting, riff-centric thrash metal for their full-length debut. This is another of those retro bands which has decided to wear 'thrash' on its sleeve, you've got the mandatory song titles ("Thrash and Kill", "Thrashing Your Brain", and "MoshPirit"). While the old timer in me tires of this, since thrash metal was not a joke to begin with and should not be considered such now, the band clearly does this out of a love for what they are playing. So let's cut to the chase: the music.

Aggression plays a riffy brand of thrash metal which recalls a lot of European classics, in particular there is an energy and attunement to melody which reminds me of Denmark's living legend Artillery. Kreator and Destruction are also in there, with a healthy dash of the American 80s scene. All of the tracks here have some catchy riff or two that makes them fun to listen to, and what more can you expect? The title track "MoshSpirit", the slamming "Psycho-Crime" and the pounding epic "Never Surrender" all caught my ears and kept my neck slamming through their durations. Lyrically this material has the inner city thrash savvy of bands like Anthrax or Nuclear Assault, and vocalist Pol Luengo has a strange voice that is distinct, with only hints of influential frontmen like Schmier or Baloff.

MoshSpirit sounds bright and punishing, you can really hear the power of the mute palms when the band breaks out a meatier mosh rhythm. Like many of the better bands to come along in the 21st century and rekindle the fire of 80s thrash metal, Aggression have actually written a solid set of tracks that have both quality riffs and leads. This is not a phoned-in homage to better years, the band does have the ability and chops worthy of the line. A little less of the silly, patronizing 'thrash' imagery would be nice on bitter old tools like myself (hint: we get it!), but in no way does it detract from Aggression's fun, guitar focused style.