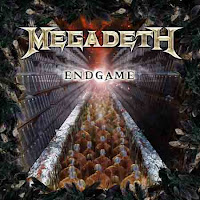 For almost two decades, people have been longing for Dave Mustaine to find and fire his silver bullet and end the curse of the long string of weak to 'just okay' albums that have stained the 'Deth legacy. To be fair, Countdown to Extinction had its moments (if you ignore the abominable "Sweating Bullets") and Youthanasia was a great album (though different for Megadeth). But after that...a void. Over the course of the past few records, Mustaine and his ever-shifting lineup have been writing more in the vein of their masterpiece Rust in Peace, and this 12th album Endgame is the closest to pulling it off.

The key is, of course, the guitar work. And Endgame is brimming with lightning riffs and mountains of shred. The musicianship on this album is evidence that Dave's fingers have not rusted in peace, and that he continues to make good choices in who performs alongside him. Shawn Drover and James Lomenzo return from the last run, with newcomer Chris Broderick (Jag Panzer, etc) taking over Glen Drover's guitar spot. Mustaine's vocals feel 'meh' as they often do, though they retain their mocking sneer. Lyrically, the album covers the usual mix of politics, murder, mayhem and racing. There are a few points (as is the tradition for Mustaine) where they are timed in places where they feel corny, but after reading through all the lyrics: they are hardly poetic, but not terrible.

But yeah, back to the guitars. On most songs here, they are simply explosive. "This Day We Fight!" feels like an outtake from Rust In Peace remixed for 2009, building a dynamic thrash groove that is faster than fuck. The 'racer' "1-320" is also anchored by some seriously badass riffing, another of the tunes I've been revisiting. "Bite the Hand" is another killer fast paced track. For slower fare, in the vein of "Symphony of Destruction" we have the rocking "Bodies Left Behind" and the great "How the Story Ends". I also dug the hooks in "The Right to Go Insane".

However you feel about Mustaine and 'Deth's turbulent history, Endgame is good, and the myriad of quality riffs here only grow on you with repeated listens. The mix is superb, I don't think the guitars have ever sounded better on a Megadeth album. This is a thrash/speed metal album through and through, the days of experimental suck of the mid to late 90s are long since over and Mustaine has reconciled himself to do what he does best. Like the latest Metallica, this is finally something to be excited about. The riffs and vocal hooks could be a little catchier, but this is worth the money for any Megadeth fan.