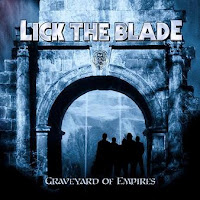 Lick the Blade is an Ohio band who essentially channel Iron Maiden and a lot of melodic 80s power/speed metal into a mildly successful union that might tug at the heartstrings of old timers everywhere. Dual melodies, galloping bass guitars, and an expressive vocalist in Ted Anderson will all hold appeal to fans of other old school American metal bands like Twisted Tower Dire, Jag Panzer, Griffin, Fates Warning, Omen, Lethal, Lizzy Borden, and so forth. Mostly, they sound a LOT like Maiden, so much that certain riffs feel like mere variations...but hey, we have bands which sound exactly like Black Sabbath, Led Zeppelin, Pantera, At the Gates, and Slayer without complaining...so why not Iron fucking Maiden?

In particular, the band's melodic energy really captures early to mid-80s period, which happened to be my favorite. You'll hear a lot of "The Trooper" in the charging "Thanatos", for example, but I think this band is at their best when they diverge a little, like the frantic "Resistance, Rebellion and Death" or the desperate "Red Warning". "Voyage of the Damned" would be this album's answer to "Rime of the Ancient Mariner", though not as long. Another good tune is the dirty, bruising "Stalker". In fact, there aren't any that I'd consider bad, it's just that some are a little more derivative than others and thus, less inspiring.

Graveyard of Empires even has a good old school tone to it which also brought back nostalgia for the Golden Age of metal music. Harris-like basslines flurry below the live sounding guitars and Anderson's voice, which can go dark and deep or shriek like a harpy. I'll be honest, a few songs sound VERY familiar, and this did somewhat dampen my enjoyment of the album, but if you can listen beyond this then there is enough here to potentially please the 80s diehard, and few enough bands stick so closely to the roots that you might wish to check it out anyway.