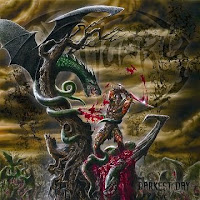 Like the previous album, Xecutioner's Return, Darkest Day is another attempt at a return to Obituary's roots: pure death metal, with deep grooves and horrifying vocals courtesy of John Tardy. Gone are the hardcore overtures which plagued some of their late 90s albums. Sadly, while it's superior to 2004's abysmal Frozen in Time, this album fails to deliver the quality moments of creepy riffing that permeated their classic albums Cause of Death and Slowly We Rot. Xecutioner's Return was proof that perhaps this horse hadn't been beaten to death, but this album is weak enough to overturn that evidence.

On the surface, this album does possess all the elements that made their old records so great. Even the mix sounds similar, with the band's signature guitar tone and lead outbursts. It just lacks in inspirational riffing. Tracks like "List of Dead" and "Blood to Give" could be outtakes from Cause of Death, but they lack the replay value. A few tracks later on the album come close, like the grooving "This Life" and the furious "Violent Dreams", but they fall shy of the mark.

At this point, I can't really call Darkest Day a disappointment. I've been underwhelmed by a number of the band's previous albums (The End Complete, Frozen in Time). Perhaps one day, the 'forces realign' and Obituary kicks my ass once again. Not this time around.