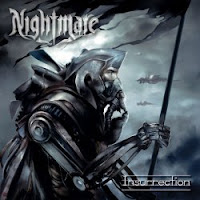 Nightmare were formed in 1979, but broke up after a few albums for a decade gap. They returned in the late 90s and have been releasing albums consistently since. The band has always been one of the stronger French power metal acts, and their recent albums exhibit an awareness of modern trends in metal, with a fusion of old school melody and modern low-end groove. Insurrection is their 7th full-length release and one of their heavier works. Most of the tracks are slow to mid-paced and vocalist Joe Amore (formerly the drummer) is not afraid to inject some snarls to affect a melodic death edge to the material.

"Eternal Winter" starts with a mid-paced, mighty anthem laden in melodies and steady chugging. Amore's vocals are very good here, with a gritty edge to them that recalls a male counterpart to old Chastain (Leather's vocals). I like his shifts in range which always feel emotional and powerful, and though the riffs are average, the song wouldn't be much without Amore's performance. "The Gospel of Judas" is a hybrid of Priest-like power metal and melodic death/thrash, while "Insurrection" itself is a wilder power metal track with higher pitched vocals. Neither of these tracks stood out to me, but "Legions of the Rising Sun" is an improvement, with a great verse riff and thrashing power breakdown. Other strong songs include the punishing "Three Miles Island" and the grooving "Cosa Nostra (Part I: The Light)".

Insurrection is bold and loud and straight to the face mix-wise. The bottom end guitars are loaded with spring coiled power, and this is one of the few power metal bands that could really get a rise out of a mosh pit. Amore's vocals sound great and the band manages to stride that border between tradition and modernism. But I really only enjoyed a few of the tracks on the album, and it's not at the level of predecessors like The Dominion Gate or the first two records. This is solid, heavy, mid-paced power metal that would appeal to fans of bands like Tad Morose, but it left little mark on me.