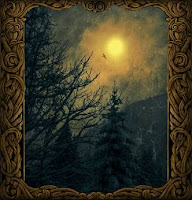 Bindrune Recordings is rapidly becoming one of my favorite small imprints in the US, with a taste for authenticity and innovation. We've already experienced Blood of the Black Owl and Celestiial, and now the debut full-length from the UK's pagan/folk/black stalwarts Wodensthrone, whom you may have already heard on last year's Over the Binding of the Waves split with Folkvang. Wodensthrone is not nearly as experimental as their labelmates, but Loss is nevertheless a 70 minute journey into the ancient British landscape that is sure to wet the palate of any folk metal fan of integrity.

That the album manages to be as epic as it is, without losing the grim taste of roots black metal, is a trait worthy of much praise. Throughout the playlength, acoustic interludes are well placed, the clean vocals and whispers make a nice addition to the standard rasp of the genre, and the consistency is difficult to deny. I found myself lost in the splendour and sadness of the album's driving, metallic fare like "Leodum On Lande", "Heofungtid", and the mighty "Upon These Stones", as well as the brilliant folkish "Pillar of the Sun". However, the true highlight/crushers of the album would be the lengthier pieces "Black Moss" and "Those That Crush the Roots of Blood", which never grow boring in the least.

The leaves of Éormensyll fall, returning to the russet ancient earth.
The wells and rivers overflow with blood of would-be wise that hang from ashen bone.
Its hollow limbs writhe towards the sky’s auroral glow.
Death becomes the twilight. The four winds no longer blow.

This is a top notch production and one of the finer sounding black metal albums of the year. Its clarity and compulsion should appeal to the layman's sense of studio refinery without alienating the kvlt black fan. Wodensthrone are very effective at capturing a sense of sadness and longing for the past...after hearing this album, I wonder if the past few centuries of 'progress' in the world have even been worth it. Of course, we wouldn't have Wodensthrone in that case, but I can't argue that Europeans would be the stronger for embracing their core traditions and heritage as adamantly as other cultures. The existence of an album like Loss is the proof. While it falls just shy of perfection, this is a killer debut album and heralds only good things to come.