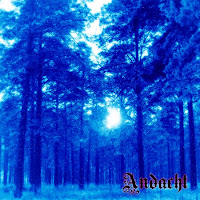 Some of you may be familiar with Floridian Reuben Jordan/Matron Thorn for his Benighted in Sodom project, others may know him as the current guitarist for German dark metal legends Bethlehem, but Thorn also has a host of smaller projects, including Vagrant Starscape and Andacht. The cover to this debut release is simple and unassuming, with very little to distinguish it from a host of amateur black metal demos and albums, but therein lies the deception. Andacht may be a simplistic project fusing the heavy use of synths with grim and repetitious black metal, but it's also hypnotic, enduring and dare I say brilliant in its honesty.

Everything here is stripped down, there is no excess. Not even the song titles, which are identified only by six Roman numerals. You will find no distraction here, you must simply listen and become enveloped within the manifest of sound both banal and cosmic. Andacht is not doing anything here which hasn't been done across a thousand other records, but he's doing it extremely well. Driving black metal rhythms waltz in perfect accompaniment with synth lines that consist of only a few glorious notes, creating an angelic nexus of sound that is "I". "II" is almost an identical setup, but with a morose atmosphere to it that cries of lost majesty. "III" flows a little harder and faster, but again, the repeated synths and rhythm guitars conjure only immersion within the musician's vision. "IV" begins with a tranquil soundscape, the most progressive moment on the album, but it soon transforms into the familiar and expected rhythms. Ditto for the spatial, dual melodies of the guitars that introduce the glorious "V", and the lumbering, introspective "VI".

For a self-produced release like this, Chapter I sounds extremely consistent. The guitars churn just below the majesty of the synths, the drum programming is never distracting and the vocals are hostile. It helps that the material is so samely in nature, but unlike many albums, this is no hindrance, it is the intention. The six pieces of music here are all paragraphs of text within a greater chapter. I am eager to read the next.