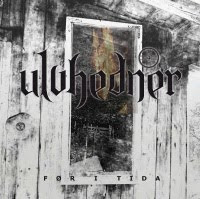 Ulvehder is a black/folk metal band from Norway involving Svein Terje Solvang, who played guitar for a few years in Tristania. The band's previous material consisted only or Ferdsayn, which was released as a demo in 2005 and later as one side of a split. For I Tida is the band's full-length debut, and a decent one which takes a different approach on several of its tracks.

"Angst" opens with an olde tyme style of intro which sounds like it could be culled from an early TV show, transforming into a driving battery of subtle, dark chords. The band uses a lot of guitar melody throughout, and it's reasonably catchy, like you'd find in gothic or melodic doom metal bands. Svein's vocals are the familiar Norse rasp of pure black metal, but he's got a good tone and often lets us hear the tormented inflections. The song also busts out a slower black metal 'groove' with some deeper, gruff vocals.
"Statsman Og Tjuv" is a little darker still, with some choppier thrash picking in amidst the gusts of cold wintry black chords. "Tollekniven" stuck out to me for some good riffing and the folksy percussion style that accompanies its leadoff riff. Some of the drums sound a little sloppy, but it's just the level at which they are mixed that separates them from the black core. Still a good idea. I also enjoyed the somber closing track "Pest" for its flowing basslines.

For I Tida has a very blue collar production, with no tricks or flourishes. This sincerity helps capture a dark heart to the music, despite all the album's melodies. The band does use the occasional clear Scandinavian male folkals, but the album is not in your face with folk elements, the vibe is created through the riffing patterns on most of the songs. All in all, it's a passable debut album, even if all the songs aren't consistently impressive, there are a few good ones. If you're interested in down to earth black metal with a cultural feel and a folk attitude which wisely avoids the flamboyancy of other bands, Ulvhedner might please you.

http://www.ulvhedner.com/Ulvhedner/ULVHEDNER.html
(doesn't seem to have been updated in some time)
Posted by autothrall at 8:55 AM