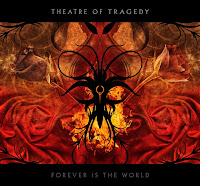 While I really don't believe in 'guilty pleasures', some might remark that my adoration for a few of this band's previous, poppy works falls into that category. I thought Assembly was a prime example of pop meets gothic metal, with a slew of extremely catchy tracks. Before that, Aegis was my favorite release from Theatre of Tragedy, an album of elegies to various mythological females, well written, with Liv Kristine's unforgettable vocals (now lost with her poor post-ToT career choices).

Forever is the World is the band's 7th full-length album and the 2nd to feature new vocalist Nell Sigland. She's not quite the equal of Liv, but she tries, and her upper range creates a similar, elfin effect. Stylistically the band has found a cross-section of their earlier, gothic/doom metal and the poppish/industrial influence, and it's refreshing. Storm wasn't a bad release, but it dropped off my radar rather quickly. Forever is the World has more staying power, a mystique that snakes through tracks like "Revolution" and "Illusions". The band has not forsaken their potential for pop happiness on "Transition" or "Hollow", and they also reach back into their heavier past with "Frozen", what with Raymond resurrecting his old growls. Few of the songs are as catchy as the material on Aegis, or Assembly, or even Musique, but when taken as a whole the album does not offend.

The album sound superb, always a quality of ToT. Most of these tracks could be played on the radio instead of Rhianna and the Jonas Brothers and we'd all be the better for it. The lyrics are thankfully not so miserable. This isn't an outstanding album, but I'd dub it 'pleasant enough', and far from the petty fairy metal crap the European market is constantly spewing in the name of bad fashion. After all, this was one of the first bands to really make the female vocals work with gothic metal.