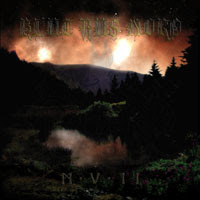 Blut Aus Nord is one of the most brilliant artists in black metal, a band that never fails to fascinate or enthrall with their unique excursions into ambient territory, crusted in a barbaric black shell. While I found their last two albums MoRT and Odinist to be genre re-defining and excellent, they did seem to alienate a segment of the band's fan base. To those fans, Memoria Vetusta II, a 'sequel' to their 1996 sophomore effort Memoria Vetusta I: Fathers of the Icy Age, makes for a kindly peace offering. That said, if you found yourself more in the camp of their recent, chaotically charged offerings, you will still be pleased, because this album simply oozes grace and quality.

Yes, Memoria Vetusta II: Dialogue with the Stars is a partial nod to the band's early catalogue, but it's also a highly refined, mature work of atmospheric black metal which scintillates from the moment of its intro "Acceptance (Aske)", a stripped down ambient piece which conjures the lush skyscape of the album's cover art. "Disciple's Libration (Lost in the Nine Worlds)" reigns you into a driving, melodic black fervor, each riff painstakingly crafted to offer both beauty and innate savagery. The bass playing of GhÖst is a constant presence, keeping the low end anchor of the composition dynamic and busy. "The Cosmic Echoes of Non-Matter (Immaterial Voices of the Fathers)" is similar, yet slightly more turbulent in its forceful shifting of interstellar energies, a beacon of black neuroses veiled in shimmering angels and celestial bodies. "Translucent Body of Air (Sutta Anapanasati)" is a breathtaking acoustic/ambient piece which leads into the driving, gorgeous "Formless Sphere (Beyond the Reason)". This album simply does not falter, but I should make specific mention of the wondrous "Antithesis of the Flesh (...and Then Arises a New Essence)", and the album's closer, "Elevation", a tonal, uplifting shift into transcendence.

Though melodious and 'catchy' from the onset, Memoria Vestuta II is still a complex enough work that repeated listens will provide further insight and 'unlock' epic patterns in the material. The mix of the album is incredible: raw enough to please fans of their earlier work, yet every note and strike of a drum is captured perfectly. The album echoes through your headphones like the voice of an extraterrestrial deity, stopping to ask you for directions to the nearest quasar. Is it the band's magnum opus to this point? I can't say as such, I hold a deep love for some of the band's earlier works and have also been impressed with their more cryptic efforts of the 21st century. What I can say is that Blut Aus Nord is the type of band we will look back on in 20 years as purveyors of genius, and this is a record which transcends black metal yet could not be more loyal to its deepest intentions.

Perfect IMO, from the art to the song titles to the songs themselves.