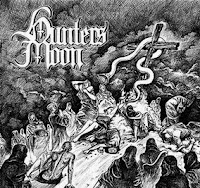 Hunters Moon is a newish project from two members of Nocturnal Graves. Like most releases through Hells Headbangers Records, you know it will involve something decidedly old school and delicious. In the case of Hunters Moon, they have essentially created a successful 'Bathory Down Under' vibe. Epic rhythms to slay by, light touches of atmosphere, leads that are laid well back in the mix and glorious melodies. However, thematically, this material is focused on Hell rather than Vikings.

The acoustics of "Deathly Paradise" echo over some forsaken battlefield before "A Light in the Abyss", a formidable epic that wouldn't have been out of place on Blood Fire Death save for the gruffer vocals and the difference in lyrical concept. "The Ravens Swoon" continues the bombast with crashing drums and a nice opening lead which burns to the soul. Again, it really recaptures that rare essence of "A Fine Day to Die". "Baphomet" is totally kick ass, with a huge, filthy groove to it. The title track is another glorious march, and the tranquil acoustics of "Last Rites" close out the EP.

The Serpent's Lust is suitably raw and entertaining, with material that is wholly consistent. If you're an old fan of the prototypes that created black metal in the 90s (Bathory and to a lesser extent Possessed or Venom), this EP will speak volumes to you. Good music, by fans, for fans. I eagerly await a full-length release.