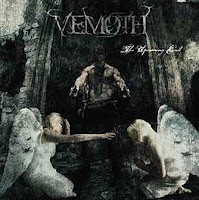 Vemoth is a Swedish black metal band performing an abrasive, no-frills style that is high on punishment and low on innovation. The Upcoming End is not the band's first foray into the darkness, having released their debut Köttkroksvals a few years past. Stylistically, I was reminded most of their countrymen Marduk and Dark Funeral. The lyrics deal with the occult, doomsday and an anti-Christian mindset.

The real strength of The Upcoming End lies in its sound. This record is loud, tense and bowls you over. The guitars shift between bloody edged, rapid fire melodies and walls of more punkish grinding black metal. Behemiron's vocals are vicious and loud, crowning the mayhem as they soar off into gates of infernal desolation. The material is consistently fast and carnal as on "Lida", "Without the Presence of God" and "Crush the Christian Lies". A few of the tunes (like the title track) have slower, glorious breaks with some good atmosphere, but even these are hostile.

I certainly can't fault this band for trying. The mix is swollen and biting and the equal of most high level black metal recordings, the band is intense and nonstop on their instruments. What I felt lacking here was moments of really memorable riffing. What they have written is alright, but you always get the feeling of familiarity and they rarely spiral off into interesting note patterns. Despite the band's level of aggression, the band feels more violent than evil. The Upcoming End is an explosion of a black metal record, but like most explosives, it is quick to fade out. What the band needs is to go nuclear, so their next assault will irradiate you long after the blast fades.