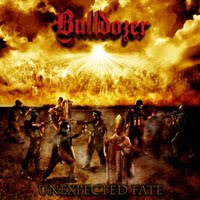 It's been a long 21 years since Bulldozer's last studio album, Neurodeliri. To describe their sound in that day, I'd compare them to the Italian equivalent of a Venom or Piledriver. Pure old school thrash/speed with roots the NWOBHM style. So when I first spun Unexpected Fate, I was blown away at how the band has become a more technical thrashing outfit which conjures up a mental mishmash of old Pestilence, Kreator and Destruction!

The title track is simply disgusting. An operatic intro, subtly building to climax, and then EXPLODING into the title track...fast as fuck riffing and Alberto Contini's unmistakeably awesome vocals, filthy as sin. "Aces of Blasphemy" launces another silo worth of hyperspeed battering ram riffing, with some excellent backing vocals and more energy than this band has ever possessed. It doesn't let up here, tracks like the Razor-ish "Salvation for Sale", the I.N.C.-like bouncing thrash fun of "Micro Vip" and the Sodom inspired tones of "Bastards" are all disgustingly awesome. "The Counter-Crusade" had me in stitches.

One of the other highlights of this album is the production. It's sort of dense and muffled, reminding me a lot of Pestilence' Mallevs Maleficarvm. Despite this, the guitar tone is clear. The leads are uncouth and catchy, and every song on the album is well written, energetic and a fuck ton of fun. If you enjoy any European thrash of the 80s, especially of the more technical, flurrious variety, this album is a must buy. Bulldozer is a band I had thought long dead, and this is one of the best surprises I've had this year. Unexpected Fate not only honors the band's legacy, but propels it forward at light speed.