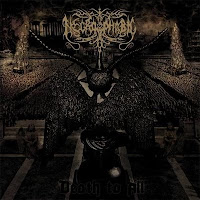 Necrophobic has always been a standout of the Swedish death metal scene, even at their very lowest (The Third Antichrist) they were capable of delivering the goods. Previous album Hrimthursum was a scorching return to form, and Death to All is another. This is fast as fuck old school Swedish death with an occult aesthetic and snarling vocals that should also curdle the blood of the black metal afficionado.

"Celebration of the Goat" opens with creepy guitar intonations before the searing maw of hell widens and devours you. Though caustic and brutal, Necrophobic go one deeper with a nigh constant stream of melodic despair. "Revelation 666" and "La Satanisma Muerte" do not let up, the former a blast of melodic evil and the latter a more rugged, thrashing exercise. I was laughing at the title "For Those Who Stayed Satanic", but not the track itself, a grim grinder with some eerie, bleeding melodies and chants. "Temple of Damnation" and "The Tower" continue the onslaught of the first three tracks, but "Wings of Death" slows for a mid-paced battery. The title track is the last and possibly best thing on this album, almost 9 minutes of hellish abandon and arterial spray.

Emotional outburst beyond human sense
Eletric we hold to unite
The scent of your skin, the grace of your soul
Together we trepass the light

Death to All is crisp and incendiary, with each track exploding into existence, or teasing you for a few seconds and THEN exploding. Tobias Sidegård has really come into his own as the vocalist of this band, and the mix of this album truly captures that occult beauty of Darkside. I am once again impressed by the unswerving character of this band, and Death to All is further evidence of one of the better occult black/death acts in the world.